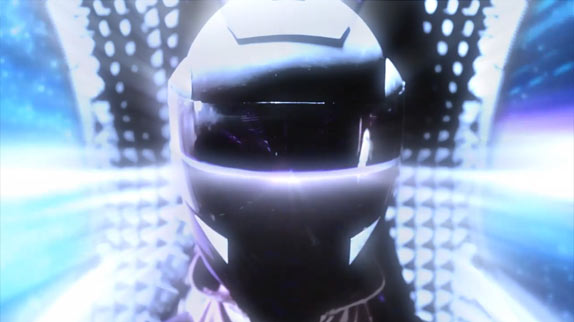 Last month was an excellent time for lovers of retro futurism in music videos. No less than three amazing videos aired, that clearly got their divine inspiration from the last three decades of the 20th century.

Intropial
First, we have Walden’s ‘Intropial’ video, animated by Dutch director Nils Muhlenbruch, which is actually inspired on THE retro science fiction video/anime ‘Interstella 5555’. It shows how more and more new video makers from ‘generation Daft Punk’ borrow freely from those fine fuzzy sci-fi aesthetics from the 70’s to 90’s. Read the interview with Nils Muhlenbruch.

So of course these are not just music videos, but part of something bigger, just like Interstella 5555. The same thing goes for Nils’ animation which according to him is more like “a sneak preview into a sci-fi world”.

Aquila
The video ‘Aquila’ by the French band Equateur follows the same rules of epic-ness. According to director Kadavre Exquis who made this cinematic piece of art, it’s not so much a music video, but a sci-fi short film.

Kadavre Exquis tells us about the plot and inspiration.
“The band was in a cryo sleep, interrupted by the fact that their native planet was dying. They were then looking for another planet were they could live. Left in space, they’re sending a space probe to scan planets. The new planet would be called Aquila…”
“This film owns so much different inspirations. The original pitch involved an anime feeling to it, but as there was live-action, it became harder to keep the whole film in this direction. So we got back to basics: Kubrick’s 2001, Star Wars…”
“The more you are digging into it, the more films and references you will find. From 50s classics to Ridley Scott’s Prometheus, I wanted to explore them all. It was intense especially since I had one month to run the production, and learning 3D at the same time…”

Check out also some making-of pictures.

He^rt
The third retro sci-fi inspired video is ‘He^rt’ from Starcadian, who made the music as well as the accompanying eye candy that appears to be one big love letter to retro hardware.

Where does that love come from?
Starcadian: “A combination of the heyday of 80s/90s VHS movies and my beloved Atari 1040 STE, through which I learned MIDI. I remember being completely enthralled by the games’ soundtracks, the imagination of electronic music and the countless possibilities.”
“To me, the makers of certain pirated floppy disks were my first rock stars. Every disk menu would have an amazing 8-bit graphic and this awesome electronic song and I couldn’t wait to get my hands on every single one, just to hear the music. So I took all those things and used them as my voice and, consequently, as the basis for the Starcadian mythology.” https://www.zp-pdl.com https://zp-pdl.com/online-payday-loans-cash-advances.php займ на киви срочнозайм с 18 лет на картувзять займ срочно