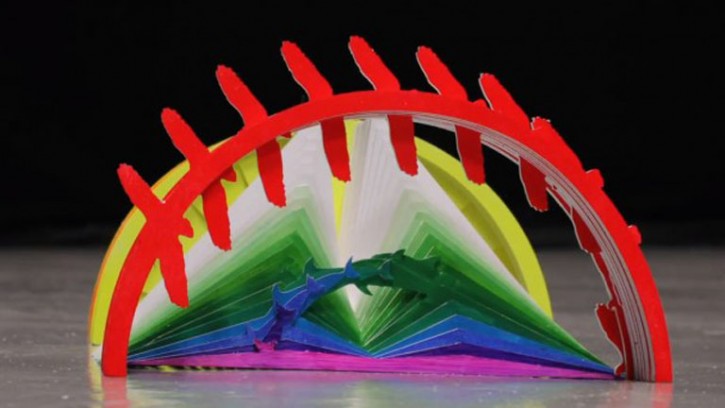 So what’s the fuzz around the 3D printer these days?! As long as they don’t appear in kick-ass music videos (besides from a rather lame cameo in Will.i.am’s video ‘Scream & Shout’), you know the 3D printer hasn’t made it yet. The laser cutter on the other hand, designed to shape 2D sheet material is still going strong, witnessing the many amazing stop-motion music videos it produces. Just take a look at ‘Katachi’ (‘shape’) by Shugo Tokumaru. It’s made with approximately 2000 PVC shapes, by Polish video makers Kijek and Adamski.

We all know Monty Pyton’s characteristic cutout animations from the seventies and Southpark from the nineties, but did you know this very early cutout animated music video from 1958? Le Merle is made with just paper and Stanley.

Ever since, stop-motion is the way to go for letting two dimensional shapes come to life. You can find the best cutout animated music videos right here on 2Pause.

Katachi is not the first video on 2Pause from Kijek and Adamski. They wowed us before with the brilliant cutout artwork ‘Dziwny Jest Ten Kraj’ by the band Pink Freud. In this mixed media music video, black and white photos are used as moving collages, with a very punk poetry feel to it.

You should definitely also check out ‘Every Time’ from the band ‘Oi Va Voi’. No scissors, nor laser cutters, but a paper shredder is used to cut out the shapes. It’s animated by a process called ‘photo motion’, by, you could’ve guessed it: Kijek and Adamski.

Looking at stop motion animations there’s always the ‘OMG, that’s so much work!’-factor. Luckily, a lot of these promos come with an additional ‘making of’ video, featuring several tips and tricks! Such is Sverre Frederiksen’s behind-the-scenes for Tim Knol’s ‘When I am King’, showing his work with cutout plywood.

That a making of-video can also be a music video in itself, is proved by the making of ‘Dear Moon’, directed by Pikaboo.

And while we’re patiently waiting on the making of Katachi, we are daring every music video maker to take it to the next level and make impressive new work with the 3D printer. Who’ll be the first?