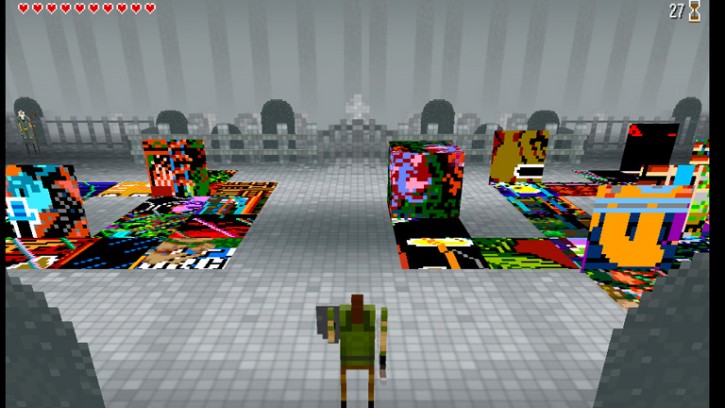 “Musical experimentation” we called it then…

But now the interactive-music-videos-that-can-be-played-like-a-game have grown up to a proper phenomenon! And the Skrillex Quest free game only reinforces this idea of promoting music. With this short game, Skrillex may have found the best method for engaging the audience, creating a visual universe for his music and selling his album, all at once. That’s right, he’s promoting. Because this game isn’t an interactive experience for just one song, but for a whole album. After you’ve finished playing it, plop!: there’s an iTunes download link. The creator of this game, Jason Oda, is well known in the gaming world for making these so called “advergames”: video games to advertise a product. In this pixely game based on the Legend of Zelda, you explore a castle, a desert and a discotheque to fight off big evil blocks of glitch, find treasures, defeat the final boss and save the princess. The goal of the game is to get rid of the dust in a NES cartridge, but don’t forget to enjoy the music so that you can download it afterward. Cheers for Skrillex, this is legit! Even more so is the wonderful video ‘Bell’ for the Japanese band Androp. This is how it works though: you type in a short text and the letters shift shape and transform into an animal, like a horse or a hare. You’re sending your animal throughout a wonderfully animated wood printed world and make it run away from foul enemies. At the end, the animal morphs back into the text again, but this time the order of the letters is different.

The mysterious conclusion of the song is a new, but incomprehensible text, which you can tweet (should you wish to do so) to whom ever. Though we can’t quite get this tweeting feature, we can’t deny the video is absolutely gorgeous and the experience fits perfectly with the music. The third music video game you should definitely check out is Sound Shapes – a platform game made for the PlayStation 3 and the PlayStation Vita. Three musical contributions to the game are made by the one and only Beck! Crossing media boundaries in music is not new to this guy and that’s why we love him so. This time, he’s surprised us again with this very inventive game in which you move a sticky dot through colorful worlds. The whole field and everything in it moves and bounces to the beat and all the other elements in the songs. Even Beck’s lyrics are visible. And there you have it!

Wanna play with your music, rather than just play music? Go check out the interactive music section in our curated music channel 2Pause.