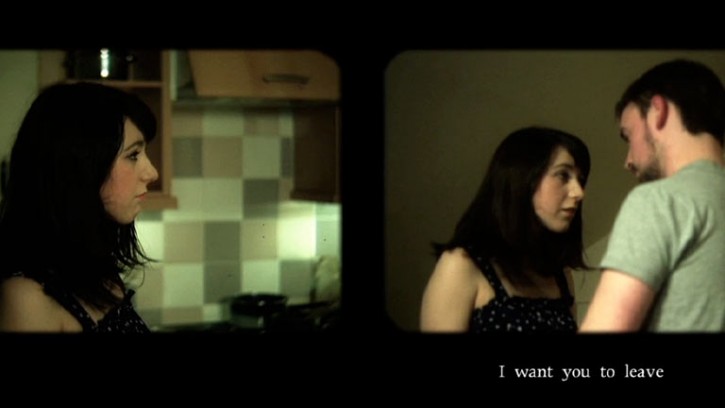 A serious relationship drama, shot on 8mm film, presented on two screens, and played backwards. That is the main premise of a music video directed by Shaun Hughes and Tim Courtney for “Distant Street Lights” by Codes in the Clouds.

This uncompromising music video stands out from most other promos on 2Pause in the sense that the directors are not out to please or seduce the viewer. Apart from playing out backwards, the video lacks spectacular visual effects or animation. It’s basically an experimental short about a couple breaking up. The director’s duo Shaun Hughes and Tim Courtney zoom in on the emotional carnage that ensues. Kudos to these two actors who play their parts with convincing passion and hurt. Reminiscent of Cinema Verité or Dogme 95 films, or even the dual screen installations by Canadian artist Stan Douglas, the locations and sets are all real, the lighting looks natural.

There’s one obvious music video reference that we cannot overlook and that is the French music video god Michel Gondry. The basic concept of one of his earliest music videos for Cibo Matto‘s “Sugar Water” is identical – two screens and a story that plays out backwards.

Nevertheless, we applaud this variation on Gondry’s classic. More please!