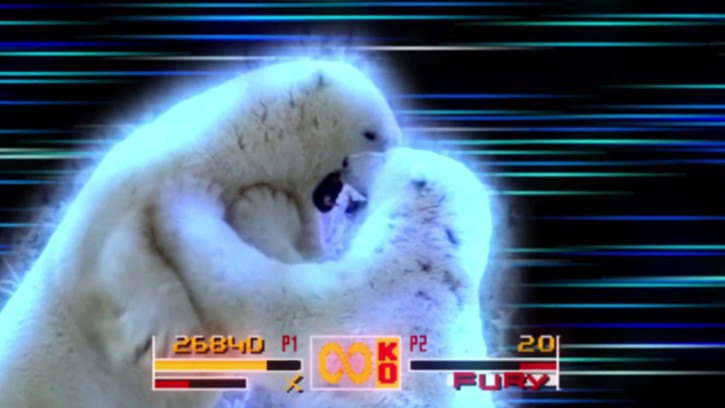 Spectrum Analyser
Ah, such a great month for music video junkies! One release that made me particularly happy was ‘Spectrum Analyser’ by High Contrast. This Drum&Bass artist from Wales is also responsible for the making of his own wildly psychedelic video which combines 8-bit game aesthetics (and sounds) with classic wildlife documentaries.

Glitch
This overlapping of two different moving images in order to bleed into each other is called datamoshing. This always looks very glitchy, lo-res, pixelated, artsy and psychedelic. There’s nothing wrong with your computerscreen, it’s only datamoshing. How to datamosh?
Want to know how to compress two videos together, in order to make them look crappy but arty? Here’s a very funny and clear tutorial which is definitely worth the watch, even if you’re not actually going to purchase the necessary software for it.

Video art
Datamoshing started as a video artform in the early 00’s by artists like Sven König, Takeshi Murata, Jacques Perconte, Paper Rad and David OReilly. It’s also widely used for music videos, with Chairlift’s ‘Evident Utensil’ being the most famous one.

So mainstream
It’s been a thing for quite some years now, although the real hipster would claim it’s sooo mainstream, since Kanye West used it in his video ‘Welcome to HeartbreaK’ in 2009.

Nailed it
Just like GIF images, datamoshing has high meme appeal. They just keep on popping up everywhere as little fillers on blogs and other digital social platforms. But if you’re really interested in this socio-cultural phenomenon, media savvy artist Yung Jake totally nailed it in his rap song ‘Datamosh’.

Yung Jake
“You thought it was an accident, a video glitch. But I did it on purpose though, it’s nothing. You don’t have bad internet, I’m just datamoshing (swag!). I’m on my web shit, ya heard me? It’s cool cause it’s nerdyyyyy.”

What’s not to love?
Hot or not, with Spectrum Analyser, High Contrast, aka Lincoln Barrett proved that datamoshing is not dead, but alive and kicking. GIF’s! Video games! Wolves! Unicorns! All rolled into a delicious psychelic wrap where music and visuals perfectly complete each other. What’s not to love?