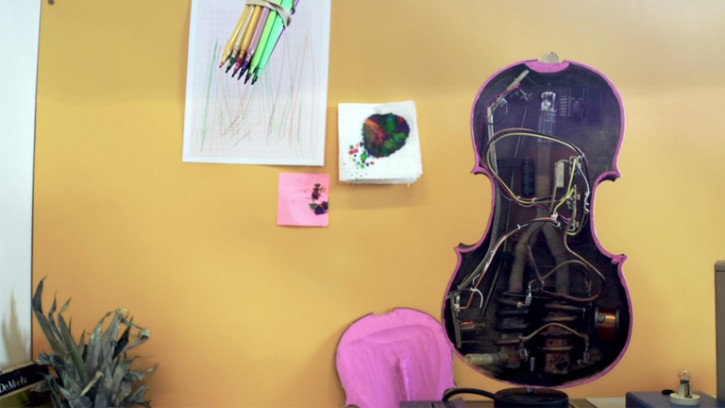 Never a dull moment with Henk Loorbach (aka Superelectric)! His latest music video is a a hybrid of music video and experimental short film that deals with sophisticated machines that transform sound into a physical form. Read on to find out how Henk did it.

First of all, a “laboratory for making sound” is not exactly the first thing that pops in one’s mind in order to illustrate a techno track. “The idea for machines that make sound comes from another project I’ve been trying to start up,” admits Henk, adding that he wanted to make a music video with dialogue in it for a long time.

Kid Sundance loved the idea. “Both the artist and the label (Fremdtunes) were super open minded throughout the whole process and came up with ideas of themselves to push it further. Henk told us that the ideas for the lab and dialogues came from “The Secret Life of Plants” an amazing 1970s doc about the consciousness of plants featuring a soundtrack by Stevie Wonder. “The experiments and theories of the 1970s are crazy cool but very serious. Plants talk and communicate, plants make sound… they were even doing concerts with fruit and vegetables back then. So I took this idea a step further and created some kind of pseudo science about sound, matter, colors etc.

“The dialogues are adapted transcripts from old educational videos, like the info films of Dell laboratories. I adapted them by adding references to audio and music to make it both believable and somewhat understandable.”

A pheasant, a russian compass and silly putty

When it came to putting together the installations, Henk admits that they spent a lot of time building them. “Kjell van Norel (Octantobjects) was responsible for this ‘impossible’ job. We spent over a month with many late nights on it. I had these vague ideas which sometimes were very hard to understand. Often a sketch would help. And we were somewhat dependent also on what weird stuff we could get from our friends or cheaply from the internet. Luckily we were both collectors of stuff”. About building the machines, Henk says that it was “the craziest combo of things – old organs were dismantled for knobs and wires, taxidermic animals were cut in half and then rewired, silly putty was mixed with iron oxide to make it magnetic, flashlights of ambulances made the walnuts spin…. The end machine even contained switch panels from a tropical indoor pool as well as three drum computers, a pheasant, a russian compass and an elevator control panel.”

The whole video making process took about two and a half months. Henk and his team spent about six weeks building the machines, while finetuning the script. Post took another two weeks. “Together with Kid Sundance, we also redid the track and the other pieces of music to make it really fit to the video”.

The only regret Henk has was that some of the machines they had built had to be turned off during filming, as they were making too much noise.
“Most of the machines were taken apart in the week after the shoot,” Henk goes on. Wish we could have done some photo-shoots with them.” On the current music video industry

“What I find fascinating” is that because of the ever shrinking budgets, people get more and more clever with ideas and technology.

“Personally I find it harder than ever to come up with simple ideas that are solid, maybe because I’m blinded by technology, or because I’m getting too old to see certain stuff as cool.” [laughs]

”I keep a giant scrapbook of things that intrigue me for whatever reason. It keeps expanding and the artists I like are in there, but because I like my life to be on shuffle, I don’t categorize anything!” With an unorganized scrapbook of interesting stuff no wonder Henk Loorbach the music video ideas he comes up with, are always so very different!